“We travel to change, not of place, but of ideas”.

If there’s one thing about America – and not just one, of course – it’s that they are proud of their country. Indeed, we have to recognize that our cousins, the hamburger eaters, were essential in the industrial era of the late 19th and early 20th centuries.

Our visit to the Guardian building in Detroit apparently won you over, so today we will visit a second one that I had the chance to photograph thanks to Pure Detroit; they organize these guided tours and are really great. Those who have a soft spot for architecture from this period will be delighted, once again, as we will be visiting the Fisher building, in the heart of New Center, Detroit.

The New Center is a historical business, commercial and residential area located about 3 miles from Downtown Detroit, where the epicenter was, what am I saying, the headquarters of local automobile firms and therefore, at the time, of the world: General Motors, Fisher Body and Cadillac. Do you need a reminder that Detroit was the world’s real economic and industrial capital at the end of the 19th century/beginning of the 20th century? I hope not, lol.

There are two main buildings in this former business district, the Cadillac Place (where General Motors headquarters was established from 1923 to 1996, then they left in their Renaissance Center, ed), and the Fisher Building. Next door is the Henry Ford Hospital and the Hotel St Regis, which is also a historic building. I’ll take a few pictures if I have the opportunity to sleep there one day, and if you’re interested, of course.

Let’s go for a visit to the Fisher Building, a.k.a “the greatest art object in Detroit.”

The construction of this superb 444-feet-high, 30-story building was carried out between 1927 and 1928. Like the Guardian Building that we visited here or the Manhattan Municipal Building in New York, for example, we are on a Mayan architecture of Neo American style, still in Art Deco.

Built and produced by architect Joseph Nathaniel French of Albert Kahn Associates, he won the silver medal for the most beautiful business building of the year 1928. You must be wondering why it is called “Fisher”? It was an order from the Fisher brothers, the Fisher Body’s owners, an American automobile bodybuilder, to set up their offices there. The initial model was a three buildings bundle for a budget of 35 million dollars; unfortunately, the great depression put an end to this beautiful project and stopped at the unique Fisher Building for 10 million dollars.

The building’s hipped roof was originally covered with gold leaf tiles, but during World War II, these tiles were covered in asphalt because it was feared that the reflective surface would attract enemy bombers – hence its original nickname: “The Golden Tower. ”

To find out a little more, you can check here or there. 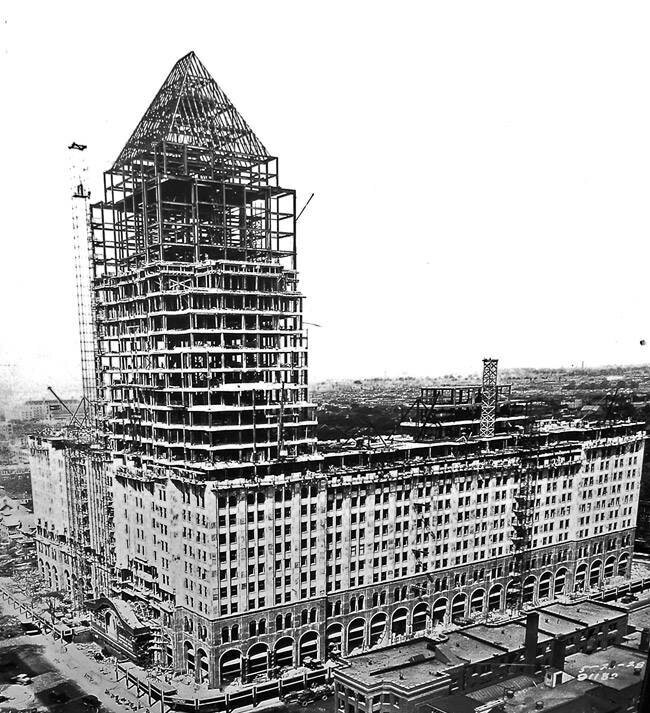 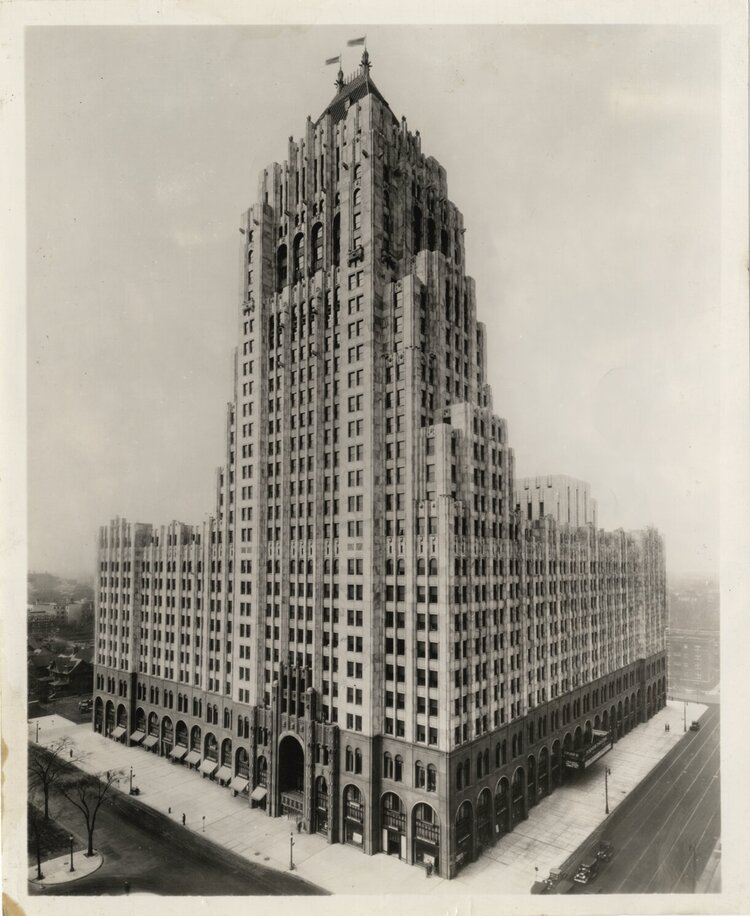 The Fisher Building today. It is located on 3011 W. Grand Blvd. – and goes around 2nd Ave and Lothrop St, in the New Center area. 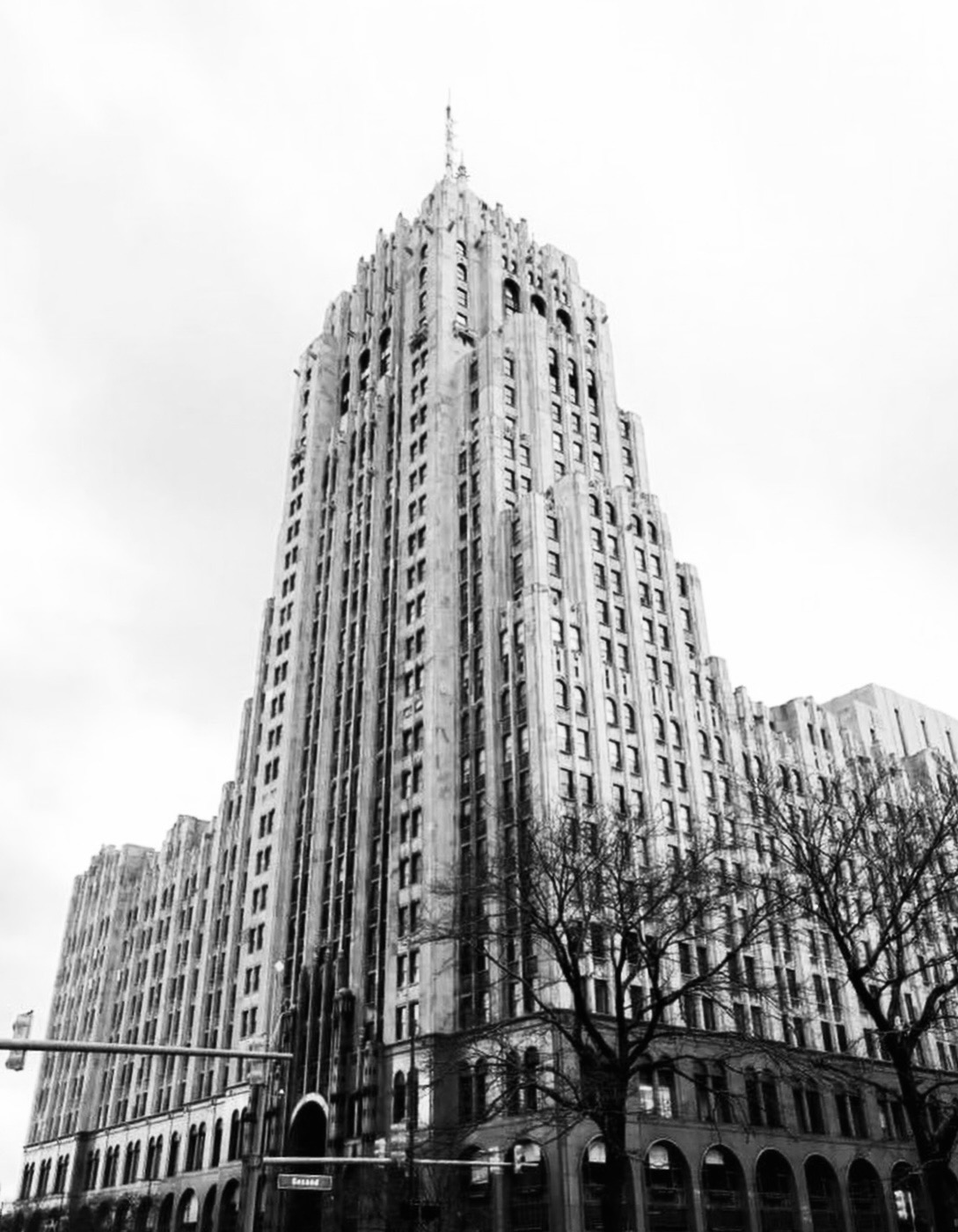 The ground floor, where Pure Detroit has one of its souvenir shops. 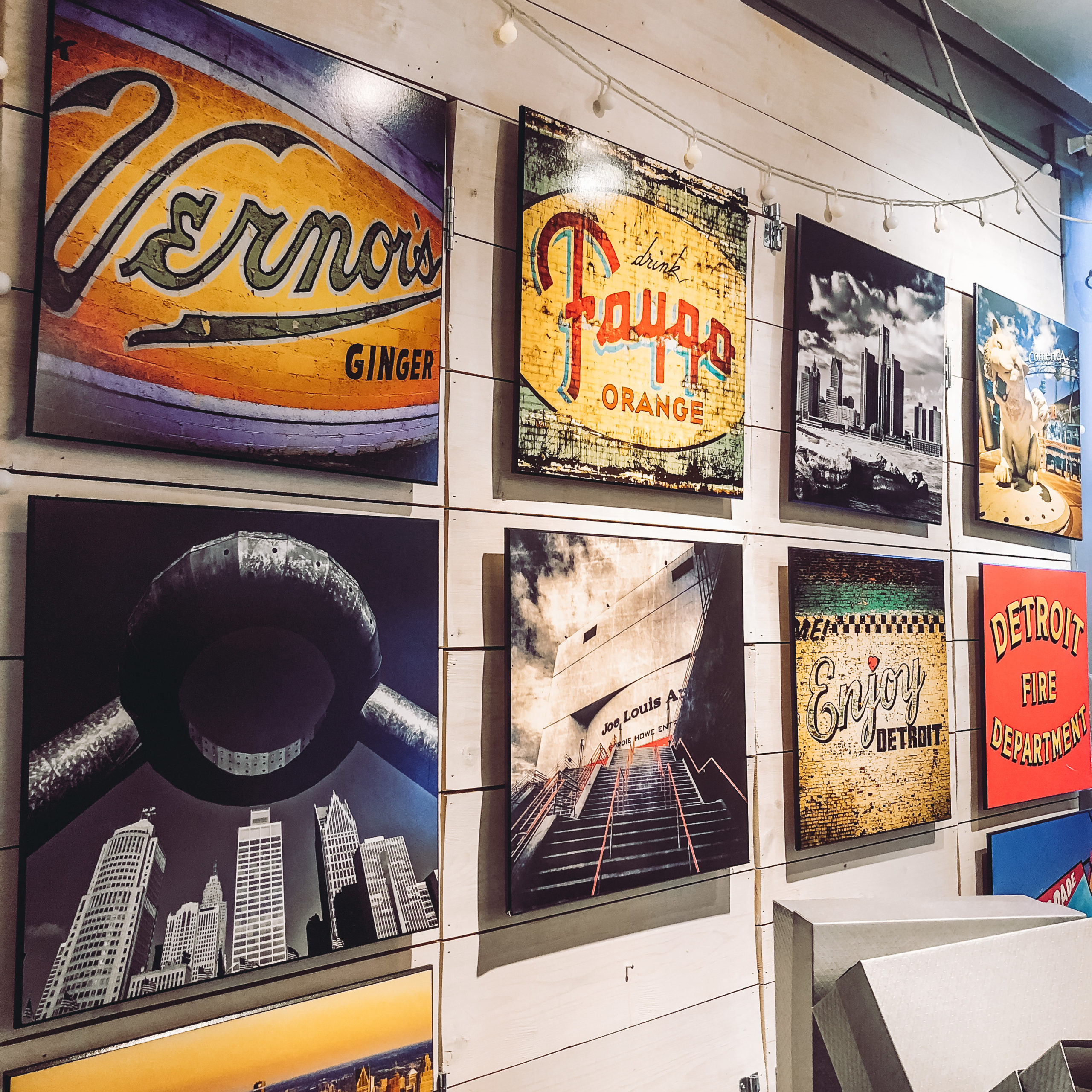 The wall of the Pure Detroit store. 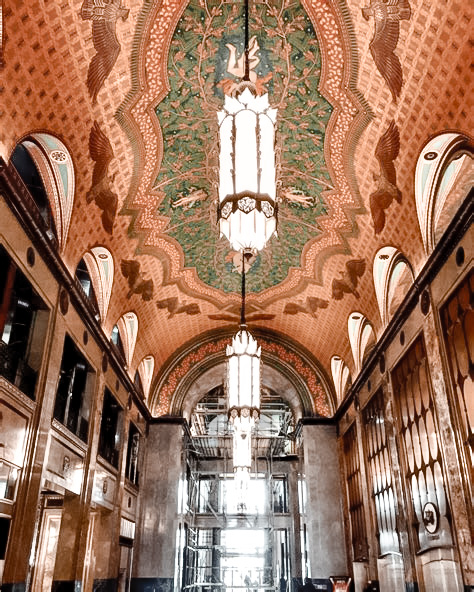 One of the most beautiful elevators I have had the privilege of seeing, with an ode to all the arts on the doors, but let’s say that your faithful servant has stuck on the sculpture dedicated to music: 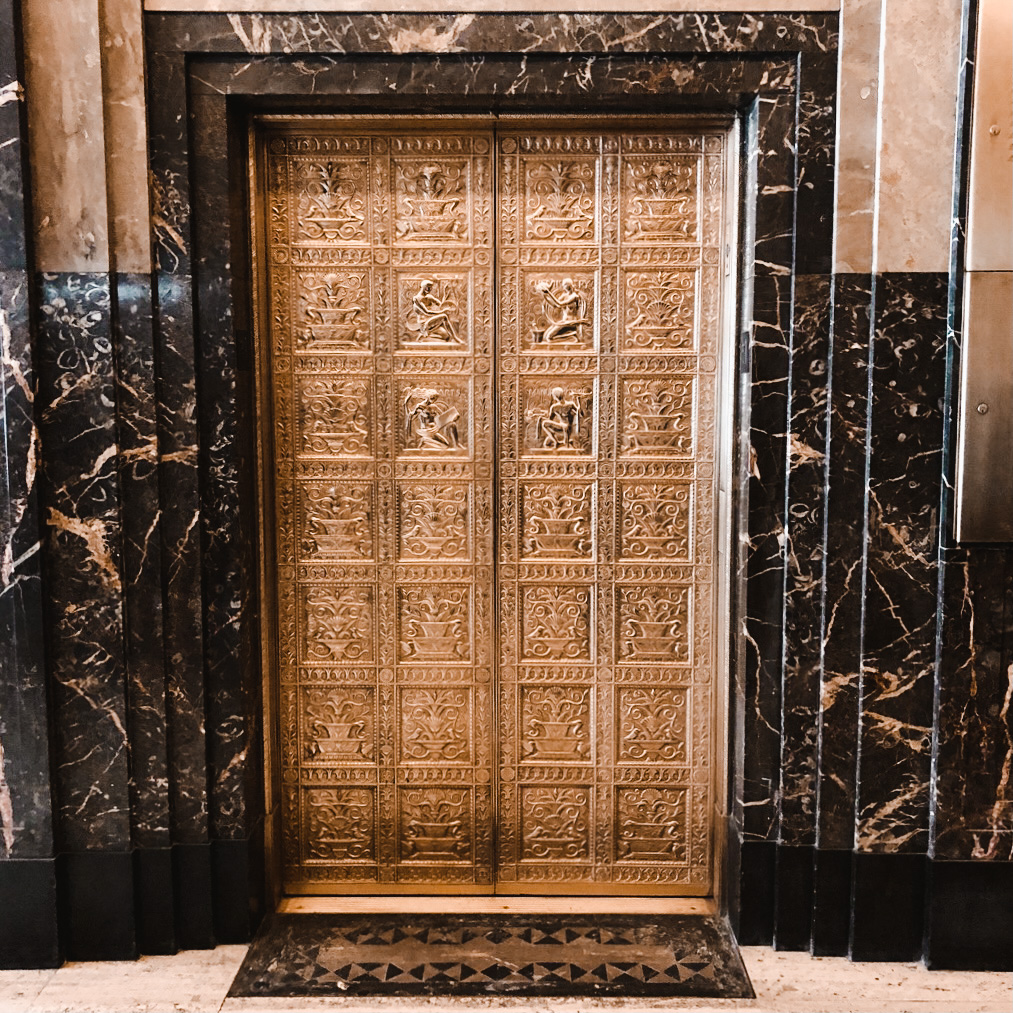 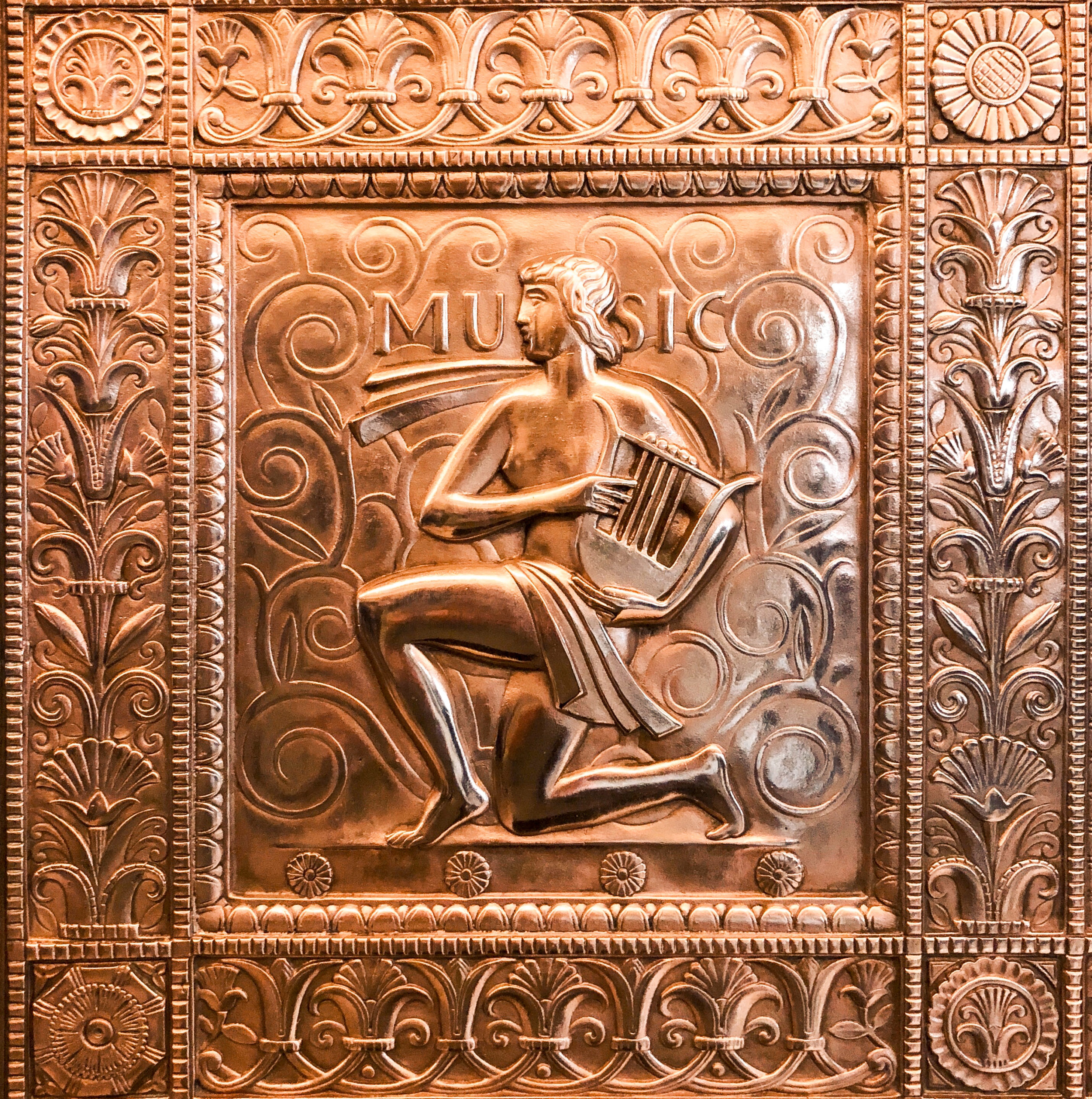 The first floor, overlooking the hall. 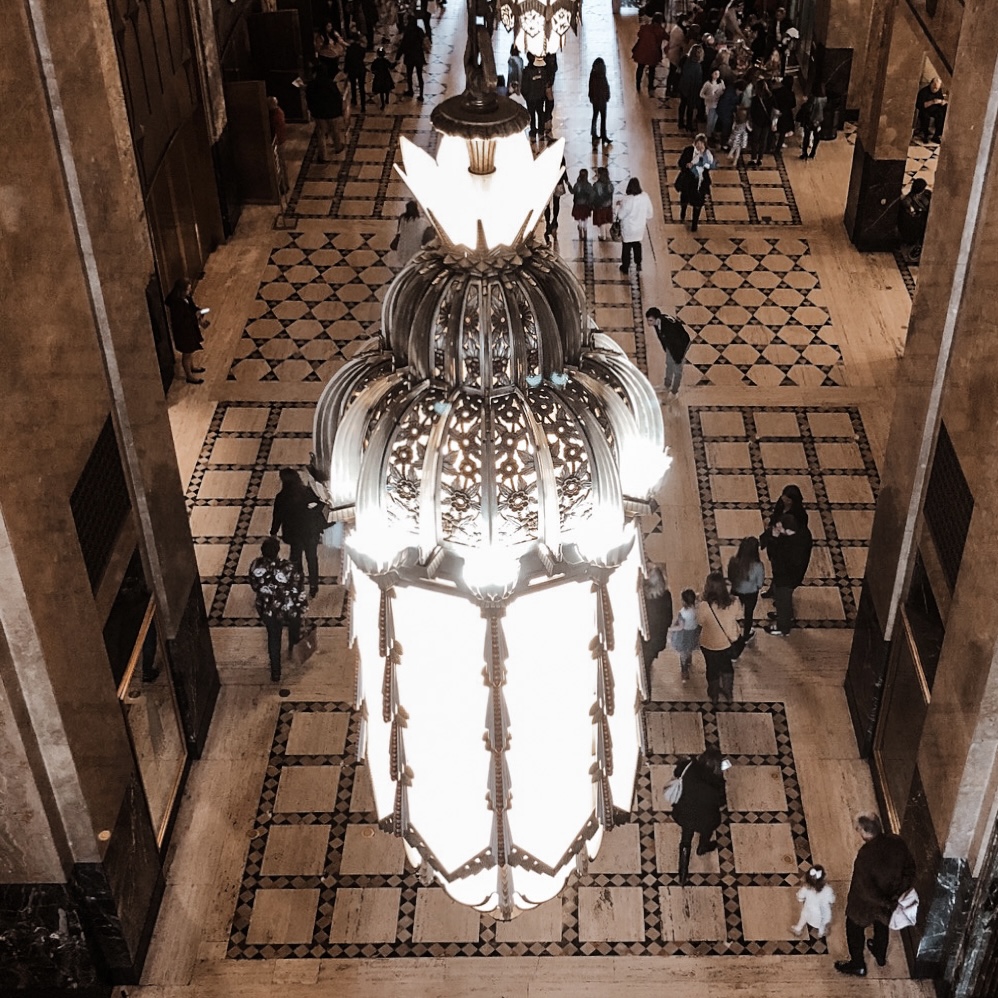 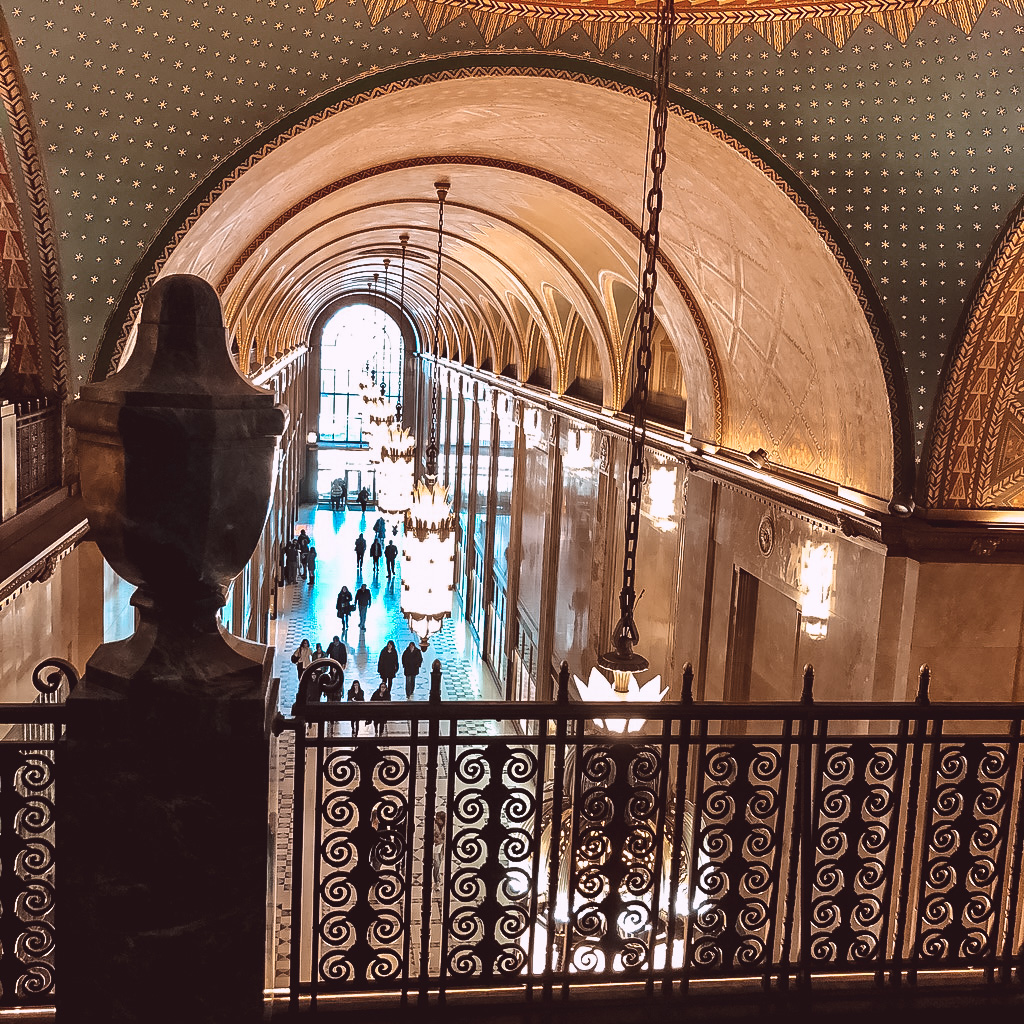 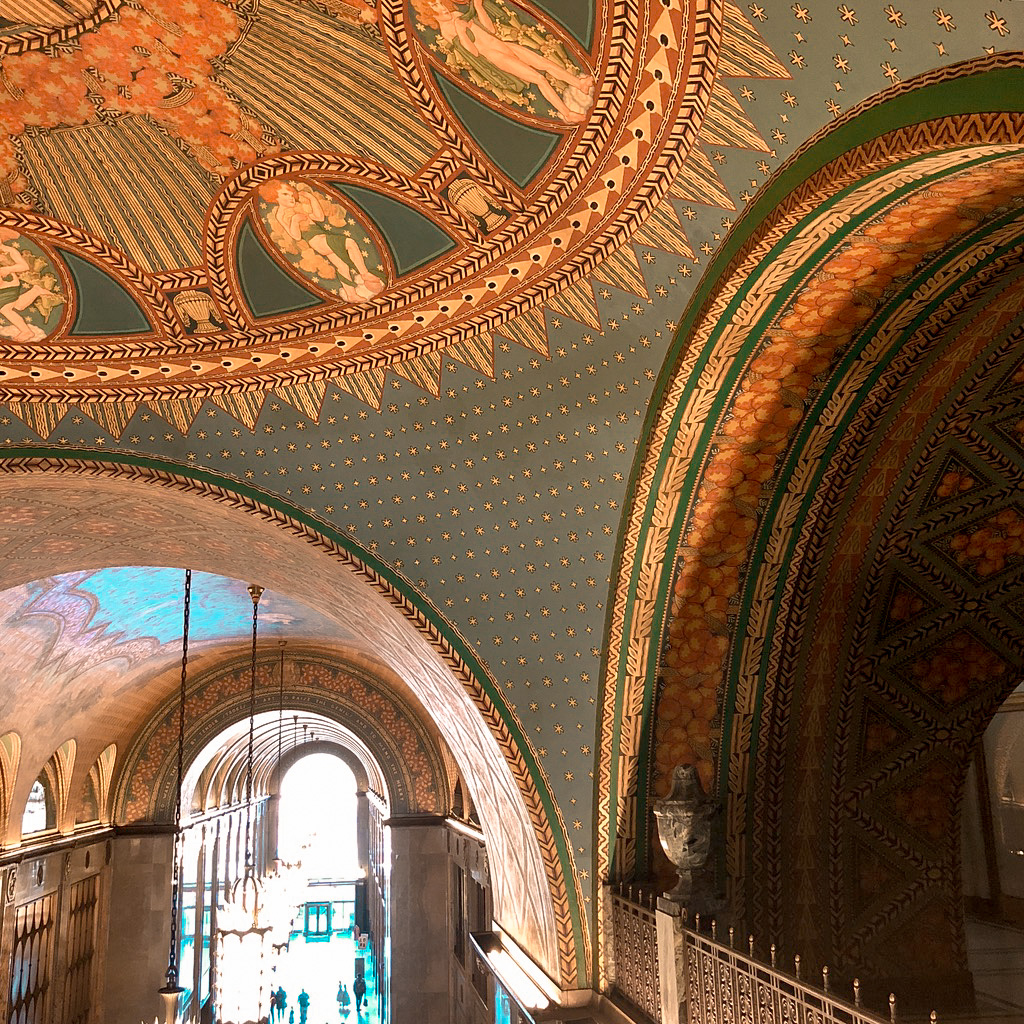 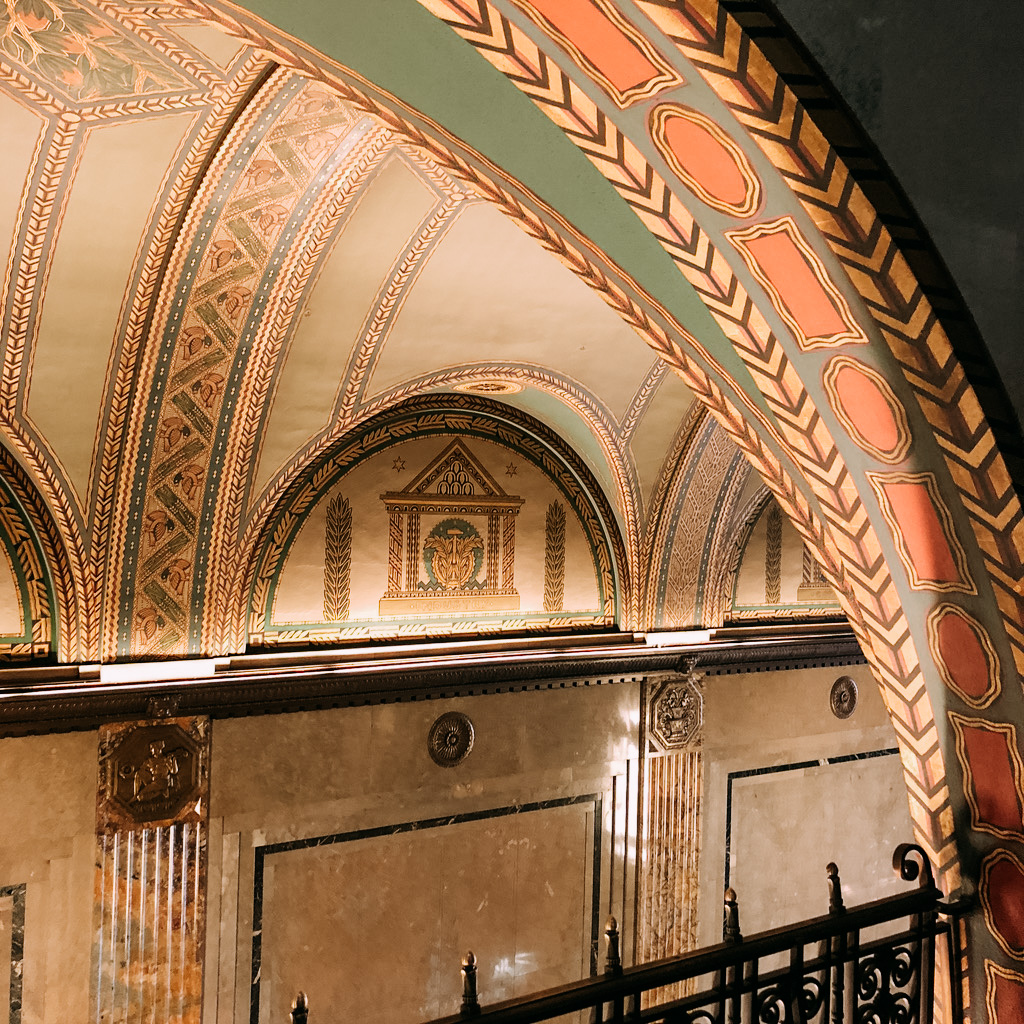 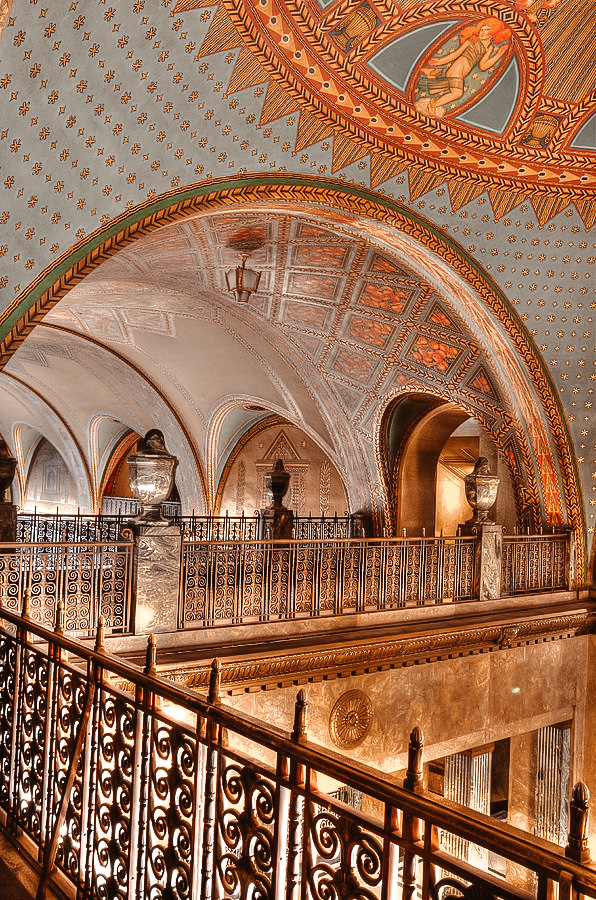 With the different floors being occupied by companies, we still had the opportunity to see a floor under work in progress, with a sublime view.

I don’t know if you have Instagram, but as the Guardian Building, you can find some moments of video visit there by clicking on the anchored story “Detroit.” 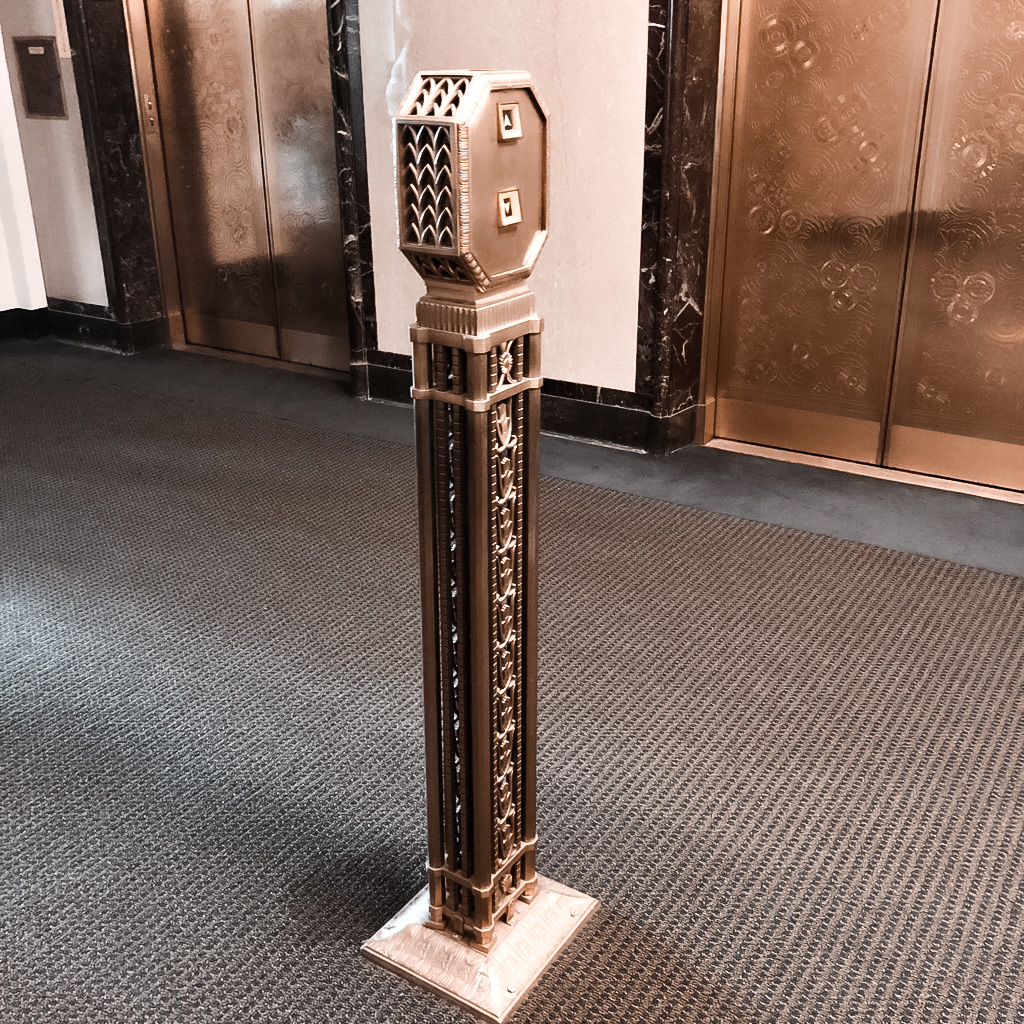 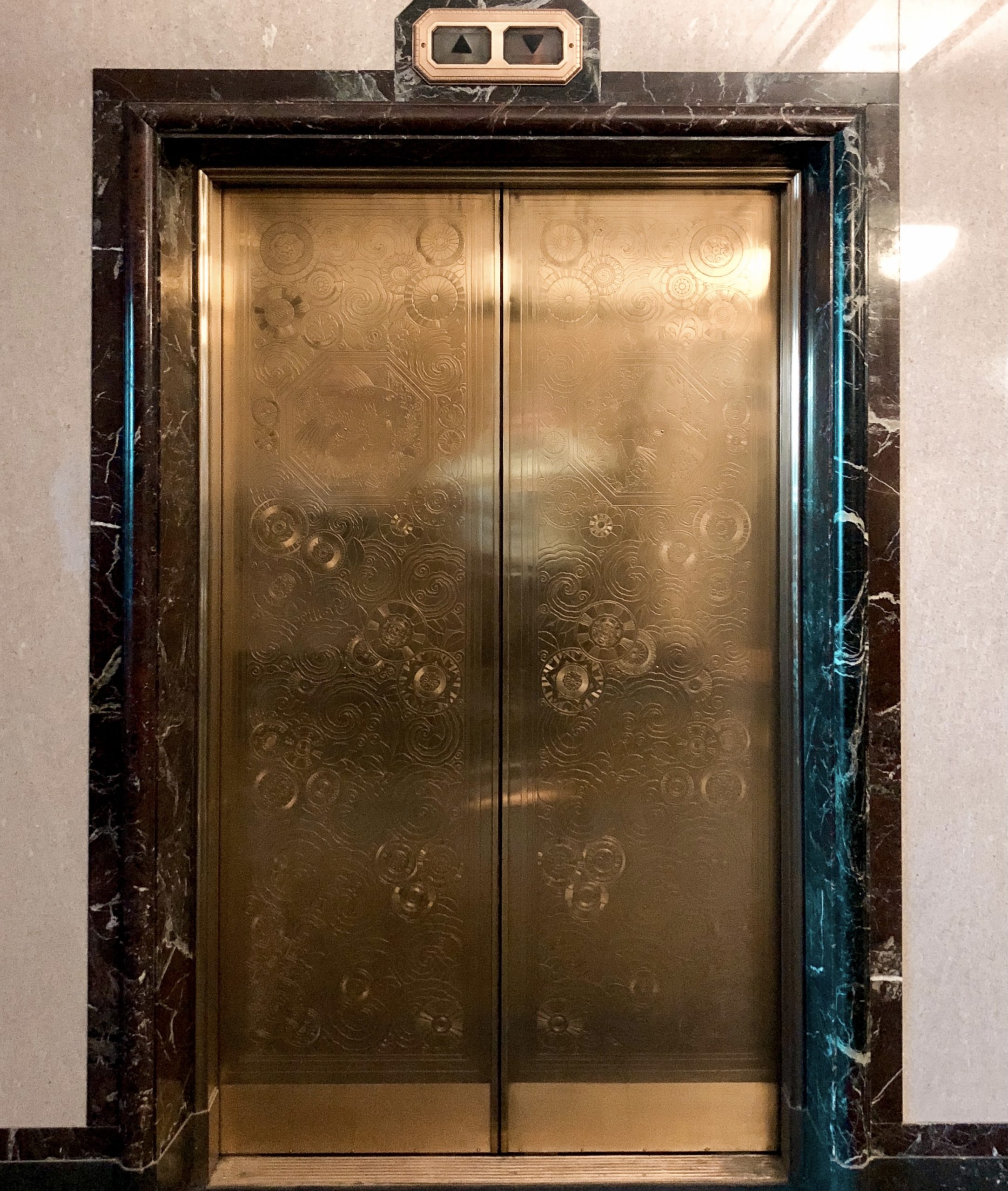 The beautiful view of Cadillac Place. 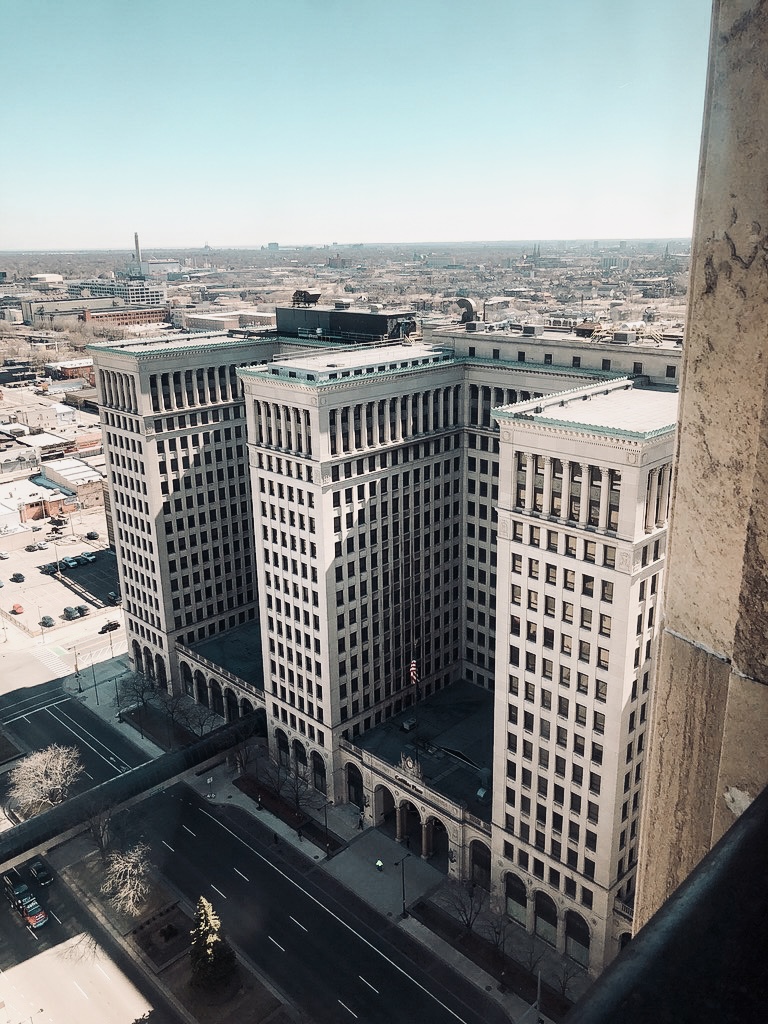 That’s it for today, dear Padawan; I hope you enjoyed this moment of escape. Have a nice weekend, and see you next Friday. 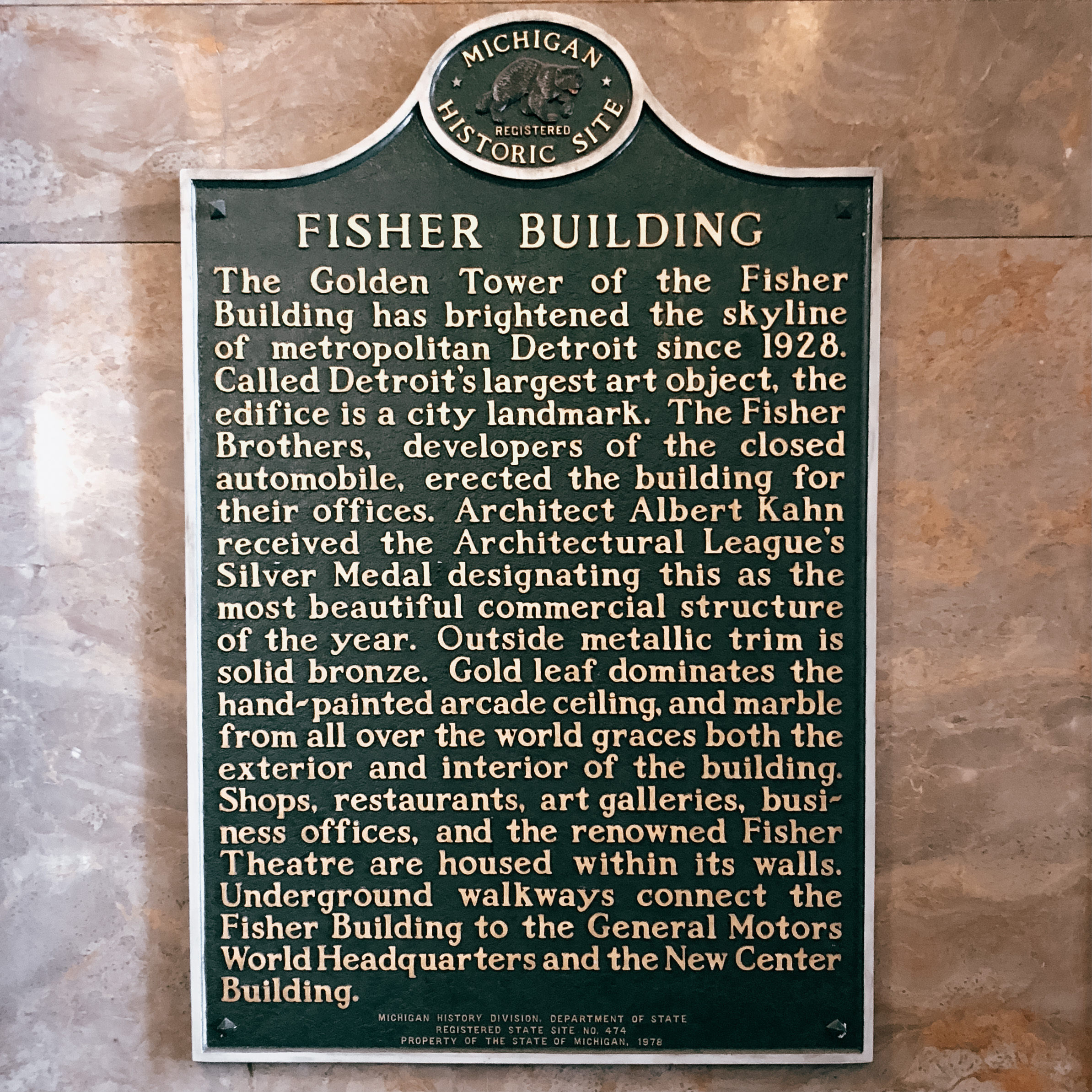