“Music is a moral law. It gives soul to the universe, wings to the mind, flight to the imagination, and charm and gaiety to life and to everything.”

Nowadays, since artists have no say in the matter anymore and I’m not the only one on the verge of “I’ll let you imagine what” – a mix between Rambo and Terminator with earrings and lipstick on, or Gizmo in a skirt who ate pizza one minute after midnight, anyway – let’s relax and talk about one of my passions, vintage music, aka my relaxation solution which I hope will relax you too.

Vintage yes, old music, sure, but not old man’s music (even if we are all someone’s old man, ed), let’s just say that your faithful servant does not waddle on “radio-retired”, but you do well what u want, lol. I’m going to tell you here about my two favorite “old” listening modes, the differences in sound, and why I like them a thousand times more than digital.

Thus, the kingdom of peace and harmony returns to our sweet souls after listening to Black Sabbath, Guns N ‘Roses, or Motörhead on their original media. Don’t worry, there will be no technique but some personal story, a little history, grace, and poetry as we know how to practice it so well here, fucking fuck.

Let’s go, and in stereo, Mario.

Indeed, many of us are fed up with the sanitized, the virtual, the completely perfect, like sometimes having the impression of waking up in the “Demolition Man” movie (according to the way I talk, I can’t imagine how many tickets I would get ! ed). Spotify and others’ subscriptions are great, of course, mp3 too, the sound is good for the train, the plane or the car, but I am one of the many people who think that music should sometimes be listened to on the medium and with the sound of their time. Indeed, your faithful servant is not very “Tokyo Hotel,” which probably explains this.

Small precision to the none-happy “ecologists”: The huge storage servers for our music, videos, digital books, or those that support virtual rental applications such as VOD and else pollute more than buying books, CDs, or cassettes, and we do not even talk about the second hand because people don’t put their art in the trash, they resale it, blah, blah. I invite you to do your own research.

In addition, virtual music is cool, but if one day for some reason X or Y, you lose your digital files? Finally, what will you bequeath to your great-grandchildren ?! Yep, enough of all-virtual, long live the physical media! Long live books, vinyl, CDs, cassettes… Super 8s and 5 ¼ floppy disks too, why not!

Finally, imagine an internet cut-off all evening. Wouldn’t you like to make yourself comfortable on the sofa or on the living room rug, with plaid and a good vinyl or your walkman on your ears?

-” … Your what? ”
-“My what ?!” Aww, dear Padawan, we are leaving from afar, lol! Don’t worry, I’ll explain to you what it was like in the mythical years of the heavy and powerful sound of the greatest rock’n’roll bands of all times.

As with the iPod, there was a guy who claimed to have invented it before, in 1977. His name was Andreas Pavel, creator of the “Stereobelt”, but it was not marketed. And honestly, when you look at the prototype below available on Wikipedia, there is an idea, but clearly it has nothing to do with it: 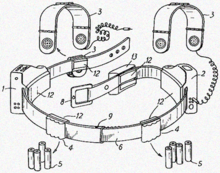 Back to the walkman. “A whole time”, and I weigh my words. Let’s take the DeLorean, to 1979. This (the blue camera in the photo of the article, ed) is the very first generation of the walkman, SONY’s TPS-L2, from 1979.

And now, the audio cassette fans are on their knees, in tears, and fainting, lol. So of course, we had to change the belts, clean and grease various mechanisms with love, glory, and the legendary professionalism of Sony-approved technicians, but know that it still sounds as in his early youth, a good sound that makes illuminates the soul.

Before the drop of this wonder, it was not possible to walk down the street listening to your favorite music in pocket format, so imagine the madness that this little gem has caused! At the time, they still had notions of relationships between human beings, so much so that Sony had equipped its first Walkman with not one but two jacks for headphones. So Brenda and Dylan could listen to their favorite artist together on the same device on the school bus. If, moreover, you want to know a little more about the appearance of this UFO in people’s daily lives or on the history of the creation of this little beast of technology, I invite you to go to this blog where you can find more information, and I also leave you the Wikipedia link.

I used to be very passionate about vinyl, which I’ve been collecting since I was 16. And then you meet new people from other backgrounds than yours, from other worlds, that make you discover theirs. These discoveries often bring you back to your own past experiences, that is what happened to me for the audiotape. I can’t remember when I got my first walkman or what model, but I was a kid. I was walking my dog ​​to my favorite music after school, it was great. I made my own medley by recording songs that were on the radio on my blank tapes. You had to wait for the ad to finish to press your feverish finger on the “record” button, that magical moment when you know that you were right on the blank between the ad and the beginning of the title and that you are going to have a perfect recording. You had to be patient at that time. Oh, I feel that there are a few of you who are not far from shedding a lil tear, lol.

And so, having been around with people passionate about cassettes for four years, I started to bring out my old mixtapes. Oh, happiness! Today it is one of my favorite media for artists from the end of the ’70s to the end of the ’90s because of the “fat” sound (sorry but I have no other adjective, the cassette sound on a Sony walkman is: FAT! ed). My last listenings of the week? The Guns N’Roses, Duff McKagan alone on his album “Believe in me”, an old personal mixtape, and … Bon Jovi, lol.

Audio cassette sound is less perfect compared to CD or certain digital formats for example, but more precise than vinyl, which is wilder.

We are going to go there in a small summary on the history of the turntable, because this little one is much older than your grandmother, lol. It used to be called a record player (1980s), but before it was a turntable, and even before, the gramophone by Emile Berliner – 1887, and even before, the phonograph by Thomas Edison – 1877, where the music was engraved on a cylinder. Even before, we had barrel organs, mechanical pianos, or even music boxes. Yes, we have been music lovers since the dawn of time, from generation to generation. I’m sure Cro-Magnon made his own mixtapes, lol.

My first device was a 45 rpm slot-in record player for children, I was 6 years old if memory serves. Later, in 1992, I was listening to my Kriss-Kross songs, especially Jump … It doesn’t make us any younger, lol.

Usually, I pay more attention to the speakers than the turntable, maybe I’m wrong but I’m not a purist. I needed a quiet, good quality turntable that respects my ears and my vinyl, lol. My choice fell on a House of Marley‘s (in reference to Bob, yep, ed.), made with recycled and sustainable materials (bamboo, recycled metal …). As for the turntable, I estimate that for 200 bucks you already have very good gear for many years, but you do what you want.
My speakers? Marshalls, of course. Non-negotiable. A few Stanmore in the living room, some in the kitchen, and an Action in the bathroom for years.

The vinyl sound is roots and wild! Cracklings, flaws, even anomalies, vinyl is definitely for romantics, lol. My favorite sounds for vinyl? Artists of the ’60s and ’70s. I’ll give you my last listens of the week, to give you some ideas: Pink Floyd, Nick Drake, AC/DC, John Lee Hooker, The Temptations, Bob Marley, Sly and the Family Stone, Gordon Lightfoot, Prince … I really like to listen to rock n’ roll or metal on vinyl too, because it gives it a very cute charm to this music. Notably this week: Iron Maiden, Black Sabbath, Motörhead, Guns N’Roses, and Metallica’s S&M2 with the San Francisco Philharmonic Orchestra.

I am sure that this article brought back the sweet memories of your first musical listening, anecdotes, and sharing between friends. I remember that my best friend, who will recognize herself, lent me the CD of Dangerous by Michael Jackson when we were in 8th Grade. We were a fan at the time, so much so that we went to see him in June 1997 at the Parc des Princes in Paris for his HIStory tour.

And you, what are your memories of music? 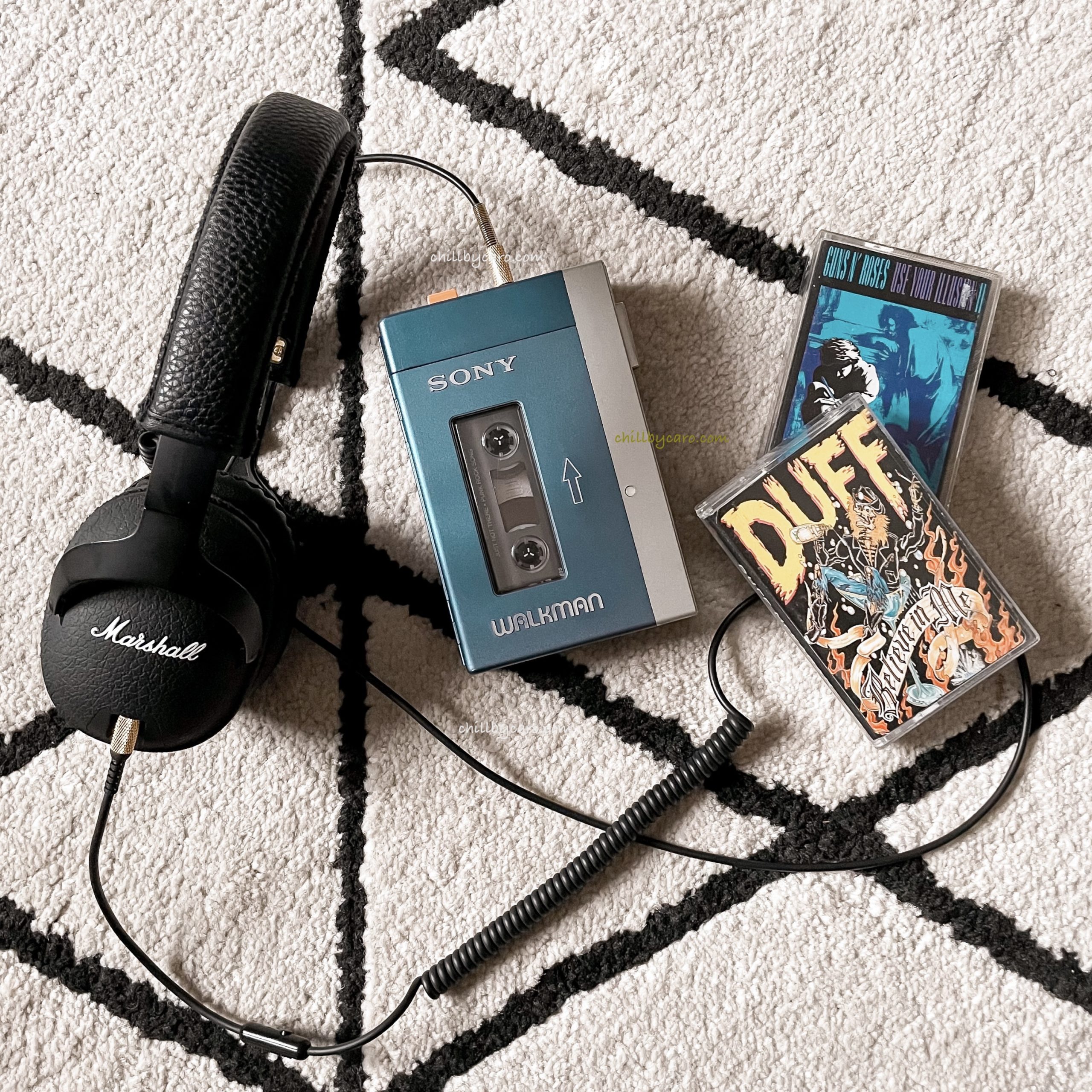