“People don’t read anymore. It’s a sad state of affairs. Reading’s the only thing that allows you to use your imagination. When you watch films, it’s someone else’s vision, isn’t it?”

A little article today to tell you about one of those musicians without whom rock ‘n roll wouldn’t have been so strong, heavy, or legendary. This is Lemmy Kilmister, the boss of Motörhead, one of the most legendary rock n roll bands of all time.

As usual, as soon as it’s written in gray, it’s a link you can click on to listen to the song.

Jack Daniel’s in the glass, cigarette in mouth, pirate hat, and leather jacket. Are you ready? Let’s go. 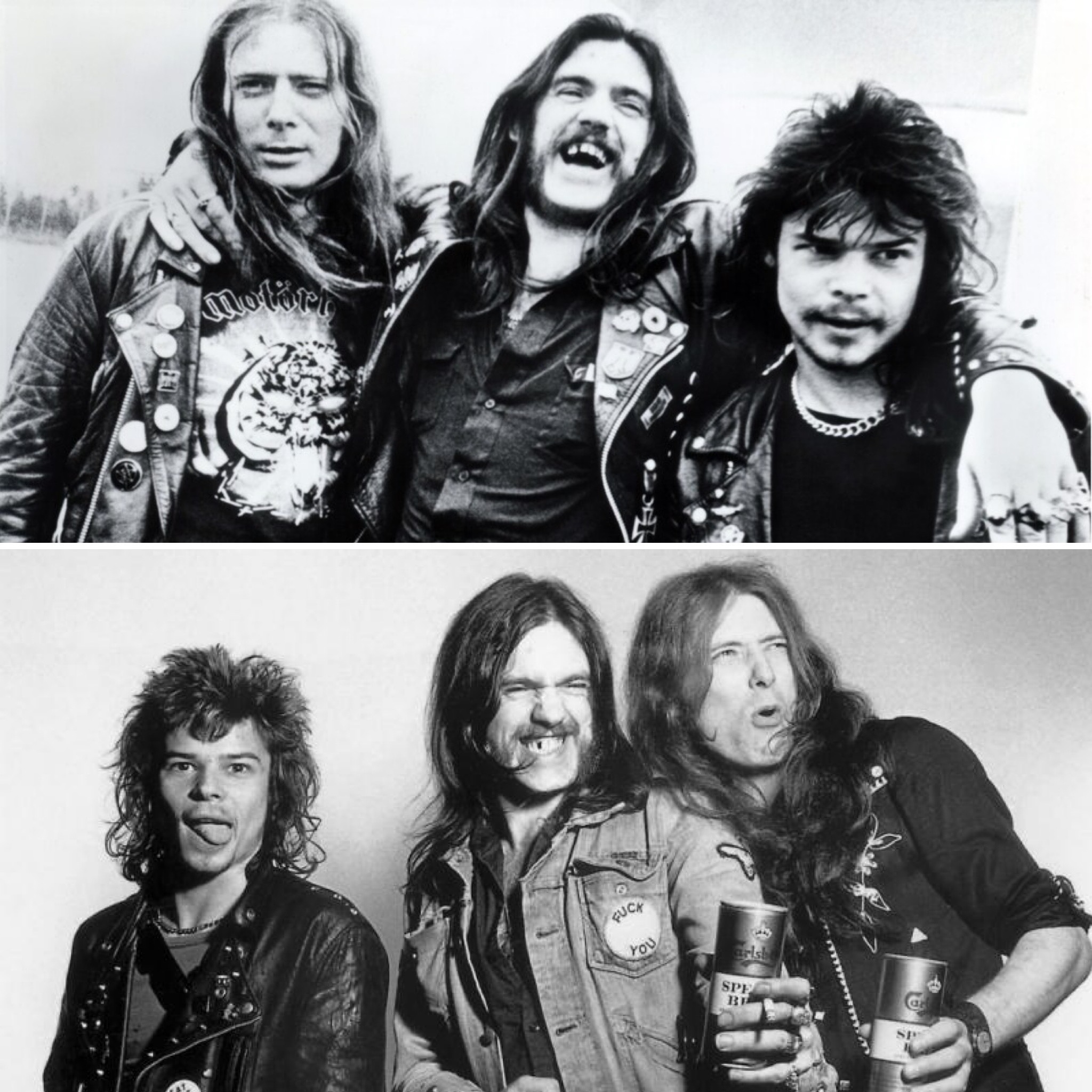 From left to right: Eddie Clarke, Lemmy Kilmister, Phil Taylor. And we reverse for the second photo: Phil Taylor is on the left. Photo credit: The Art Desk (link at the bottom of the article).

Lemmy Kilmister, the beginnings of the Rock n’ Roll legend

Once upon a time, in Burslem, an English suburb between Manchester and Birmingham, a little boy was born on Christmas Eve, 1945. He will be named Ian Fraser Kilmister. Until then, nothing cuter.

Well, the dad leaves when the baby is only three months old, then his mother remarries when he is ten to a guy who has two kids and gets on really badly with him. Subsequently, the young Ian starts playing slot machines and gets into debt with his classmates, hence his nickname “Lemmy”, which comes from “Lemme” contraction for “Lend me a Fiver.”

At 16, he discovered the Beatles playing at the Cavern Club, in Liverpool, and began to learn to play the guitar by listening “Please Please Me“, the first album of the latter – to see my article on the Beatles, you can click here. He leaves school because his parents move again and begins odd jobs and playing in bands here and there. He finds a job as a roadie, notably for Jimi Hendrix, but continues the music by working for various bands in parallel.

In 1971, he joined the space rock band Hawkwind on bass and vocals. First time for him that he practiced bass, and he will develop a unique playing style influenced by his experience as a rhythm guitarist. Indeed, it plays in chords based on a saturated sound by ensuring both the role of a rhythm guitar and that of the bass. His stint in the band Hawkwind will be decisive for them insofar as Lemmy will sign the greatest success of the band, the song “Silver machine“, and would greatly contribute to the band’s fourth album, Space Ritual, the first recorded in public, released in 1973.

However, in 1975, he was expelled from the band because of a case of concealment of drugs at the Canadian border. He spent five days in prison and was released without incident.

He then decided to set up his band, “Bastards”, with two friends in 1975, with Larry Wallis on guitar, who had previously played in the Pink Fairies and UFO, and Lucas Fox on drums. Lemmy, you guessed it, will handle bass and vocals. He changed his mind about the name of the band shortly after, when his manager told him that a band called “Bastards” (Bastards) could never get a place on Top of the Pops, and choose Motörhead, which was the last song composed for the band Hawkwind, but also British slang for a guy who runs on speed – an amphetamine addict, in short. Yes, always good taste, finesse, and voluptuousness; it’s essential in rock n’roll. Quickly, the two musicians were replaced by Eddie Clarke on guitar and Phil Taylor on drums.

A first eponym studio album was released in 1977, and the band’s success soon began. Lemmy’s raspy voice is unique in the rock world at that time. Just like the very high position of his microphone. In his very beginnings on the stage, having his head towards the sky made it possible to avoid looking at their meager audience, made up of barely “10 people and a dog”, he said, lol. Their sound immediately appealed to heavy metal fans but also fans of nascent punk rock, although Lemmy would later admit that he felt more comfortable with punk. The band’s success skyrocketed between 1980 and 1981, with many singles charting on the UK Chart Hits, including the classic Ace of Spades and the live album No Sleep ’til Hammersmith, who becomes number one in the world. Motörhead became one of the most influential bands in the heavy metal movement, which Lemmy would always correct by saying that they rock n’ roll.

And so this is how Motörhead was created, the band in which Lemmy will spend his entire career, with a few collaborations here and there, such as his participation in the writing of the album No more Tears by Ozzy Osbourne, a mythical collaboration where he signs the lyrics of the songs « Hellraiser », « Desire », « I Don’t Want to Change the World », and what remains his greatest success, « Mama, I’m Coming Home ». Lemmy will then admit in several magazines to have earned more money thanks to the royalties of this piece than with the songs written with Motörhead, lol.

He sang Triple H’s entrance theme with Motörhead for two different years. He also participated in the recording of the first solo album released in April 2010 by Slash, the solo guitarist of the Guns N’Roses, while singing on the track “Doctor Alibi“.

He finally participated in a band, The Headcat, a contraction of Motörhead and The Stray Cats, from 2000 to 2011, where they played some covers of good old rock n’ roll, paying tribute to artists like Elvis Presley, Lloyd Price or Johnny Cash.

On the illustration photo of this article, I felt compelled to photograph a best of in vinyl version of Motörhead, so many titles are known or to be discovered, but I will of course present you some essentials in addition to those mentioned higher, like the great Overkill, Iron Horse / Born To Lose, Motörhead, Lost Women Blues, Dancing On Your Grave, killed By Death, Love Me Forever, and so many others that I can no longer abuse your precious time!

Lemmy had a rock n’ roll life. With a unique health constitution, the guy drank a bottle of Jack Daniels daily, plus various drugs such as LSD or amphetamines, and died at 70. Good after, a doctor confided to him all the same: “You see, if you are given pure blood, you will die… But, please, do not give your blood! It is so toxic that you would kill someone “! But, a regular paradox among rock stars, he was a man of good manners and politeness. He was also against heroin; he had seen so many of his young friends die of this shit.

The legend also tells that he would have had 2000 women in his life, even if, in an interview, he admits to having had much fewer. He also said, “I’ve never made objects of women. I’ve always been honest. I treat people the way I expect to be treated. Women are like me, with boobs”. He was still ranked number 8 in Maxim magazine’s “Legends of Sex,” lol.

He was also a cultured man, who read a lot, passionate about history and especially World War II, but for that, there was no classification of “Legends of general culture”…

He will receive many posthumous and sometimes somewhat comical tributes. For example, at the beginning of 2016, a petition was launched for the name of Lemmy to be given to ununpentium, a heavy metal whose discovery the International Union of Chemistry confirmed on the day of his death, December 30, 2015. In November 2016, the asteroid (243002) 2006 TG119 was named Lemmy in his honor. And in August 2017, the fossil of a prehistoric crocodile discovered at the beginning of the 20th century was named “Lemmysuchus.” This probably means there is a lot of rock n’ roll fans among scientists, lol.

And this year, in June, a huge statue of Lemmy, containing some of his ashes at his request, was unveiled at Hellfest. If you want a little more info, you can click here.

And that’s it for Lemmy’s busy life, in outline, as always, to make you want to listen to his music a little and because this man was and will forever remain a great rock n’ roll legend. 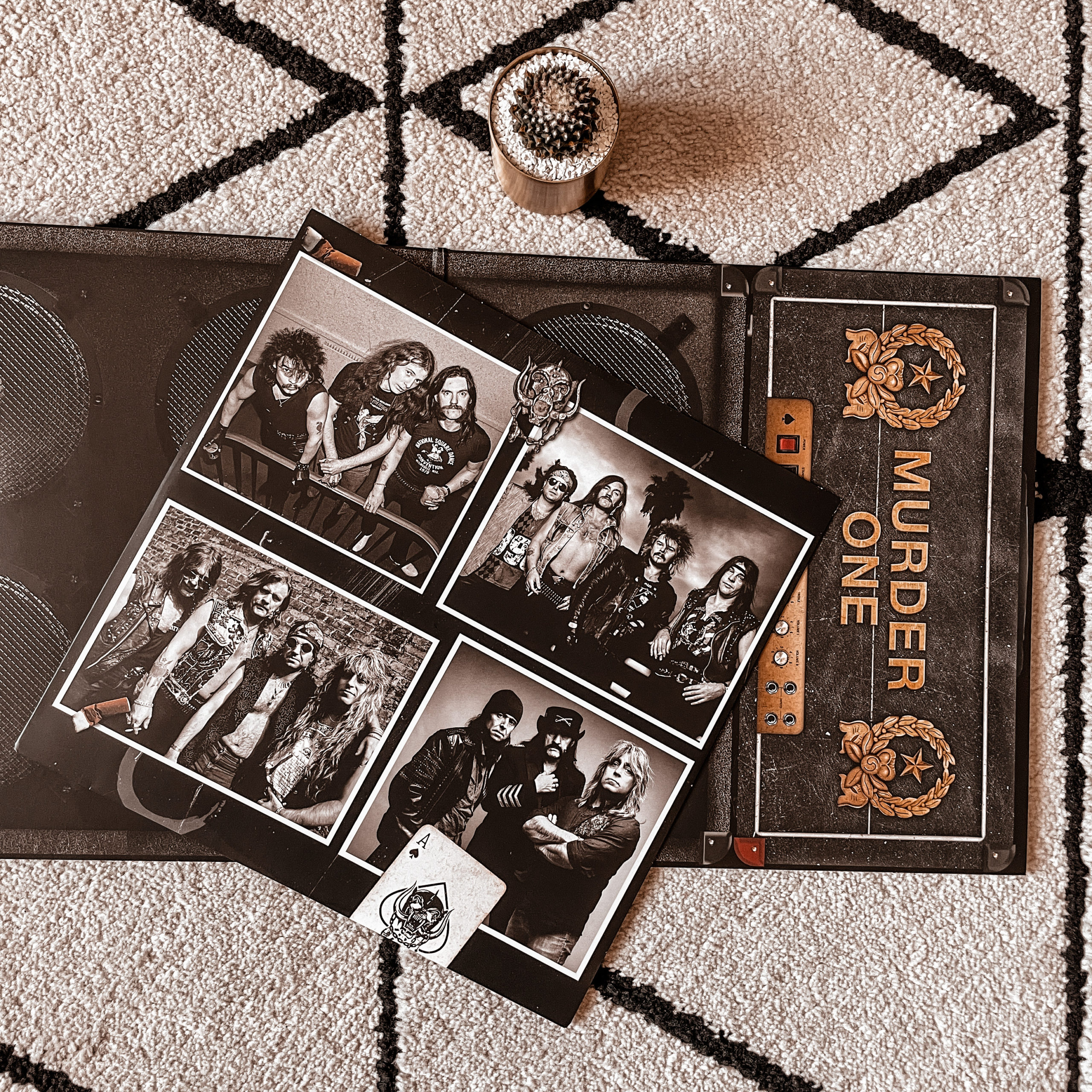